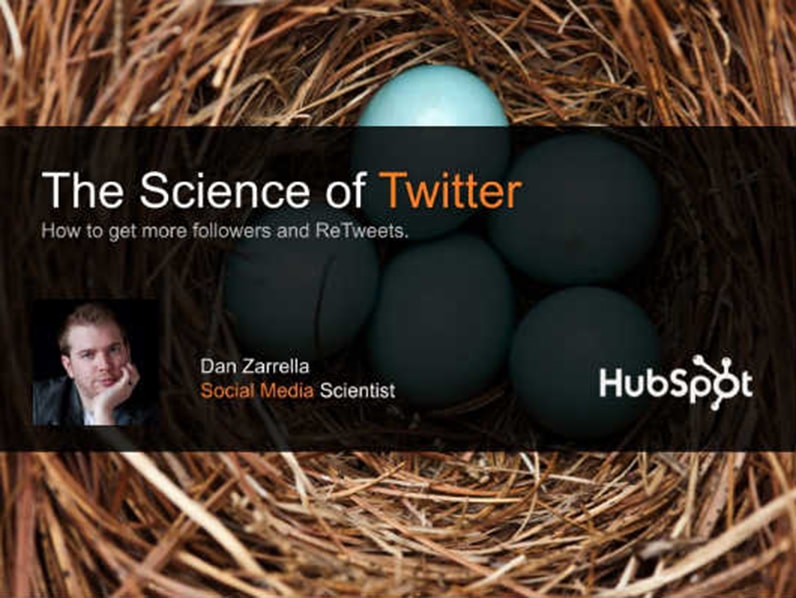 We’ve taken a break from our series on Twitter for the last couple of weeks but today, we’re jumping back in with a BAM!

If you’re serious about getting thousands of Twitter followers and getting retweets, then you’re going to need to know things like how to write great tweets or how to tweet at the best times when your followers are online,

But to really take your tweets to the next level, you’ll want to follow these expert twitter tips below from Dan Zarrella.

If you don’t know who Dan is, he’s one of the most well known and sought after social media experts.

He’s best well known for studying statistics from social networks and turning the patterns that he discovers into a science.

Social media marketers and entrepreneurs are in love with this man ♥.

I was invited to a webinar called The science of Twitter that Dan did last week. So from the webinar, here are 18 tips to help you get more followers, clicks, and retweets.

Twitter Tip #1:  Your profile picture has a direct effect on the number of followers you get

If you just have the default Twitter egg, you’re going to lose out on followers.

Research shows that you make up your mind about a person within just a few seconds of meeting them.

It’s the same when you meet someone online. That’s why a good candid picture of yourself is a must-have if you want to get more followers.

I’ve known about this tip for a while and that’s why it’s step 1 of 7 in the free guide to getting thousands of Twitter followers.

If you have a call to action in your Twitter bio that tells people why they should follow you, then people who come across your profile are more likely to follow.

Check out the graph below for a list of the words to include in your bio that get the most followers. Twitter Tip #3:  Don’t think that public conversations will help you to get more followers

When you reply to someone’s tweet using a mention, it does very little to expand your reach on Twitter.

Instead, check out the next tip to find out how to expand your reach.

Twitter Tip #4:  Tweets with interesting links are more likely to get retweeted and will help you expand your reach Twitter Tip #5:  The number of tweets you send out a day has little effect on the number of followers

There’s no such thing as tweeting too much.  If you send out a lot of tweets a day, you don’t have to worry about people unfollowing you.

Using words like “me” or “I” in your tweets won’t get you very many retweets.

Make it mostly about your followers and you’ll be on the right track.

A list of the words that get the most retweets are coming up in another tip.

Twitter Tip #7:  Tweets with negative words or sentiments are a quick way to get unfollowed

Statistics show that if the overall tone of your tweets are negative then you will get unfollowed.

Be positive and your followers will keep following you.

If you send out more than one tweet per hour that has a link in it, you’ll get less clicks on the second and third tweets that you send out that same hour compared to your first tweet.

If you share 4 links or more in the same hour, your click through ratio drops to almost zero.

Therefore, its best to tweet 1 or 2 tweets per hour that contain links to maximize the number of clicks. The research shows that longer tweets get more clicks if there is a link in them.

At the same time, don’t forget to leave 10 to 20 empty spaces in your tweets so that your followers can retweet you easily.

Twitter Tip #10:  Try putting your links 25% of the way into your tweet. They may get more clicks.

This one sounds weird but tweets that had a link in them a quarter of the way through got more clicks.  The heat map below illustrates this well.

Twitter Tip # 11:  Using calls to actions in your tweets results in more clicks

Using action verbs like watch, click, check out, view etc. will get you more clicks if you use them in your tweets.

Tweets sent on Thursday thru Sunday get more clicks.

Tweeting later in the day will get you more clicks than tweeting in the morning.

You can check out slides 33 and 34 in the SlideShare that’s linked to at the end of this post to see the graphs if you like.

Twitter Tip #13:  For the most retweets, try tweeting during Friday afternoons

Friday afternoons seems to be the most popular time when people like to retweet the most.

Twitter Tip #14:  These are the top 20 retweetable words to include

Include these words in your tweets and you’ll get more retweets. Avoid these words to avoid not getting retweeted. Twitter Tip #16:  Writing great headlines in your tweets will help you to get more clicks and retweets

What you say in your tweets has a direct effect on the number of clicks and retweets that you get.

For help on this, check out this blog post which shows you how to write great headlines.

Twitter Tip #17:  Adding “please retweet” to your tweets gets you 4 times more retweets

If you want something retweeted, just add the words “please retweet” at the end of your tweet.

However, if every other tweet you send asks your followers to retweet it, then they’ll eventually get tired of it.

So use this one sparingly.

Twitter Tip #18:  Tweeting news or saying things in a new novel way will get you a good amount of retweets

Being unique in your tweets and saying things in a fun way are two great ways to get your followers to give you some Twitter love.

To view Dan’s slides from this webinar, you can check them out on SlideShare by clicking here.  You can visit Dan’s website here.

Many of these steps are included in the free guide to getting thousands of followers.

If you haven’t gotten access to it yet, check out all the reasons why you’ll want to get it.