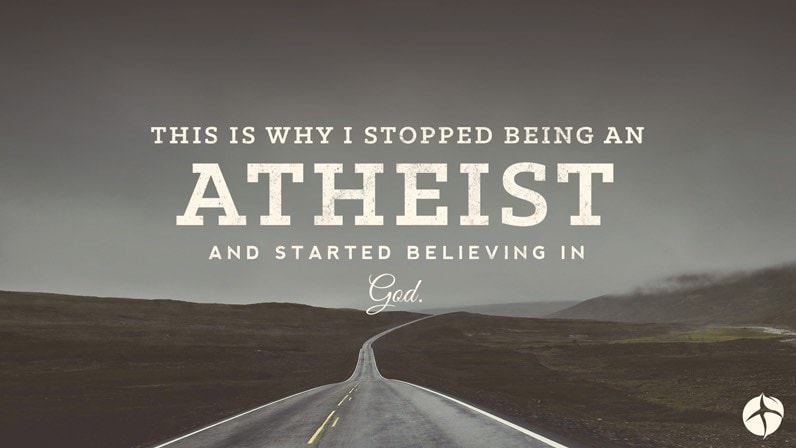 Special Note for Christian Readers - Atheists and Agnostics Can Skip This Blue Box.

To my Christian readers of this blog, today’s post is not for you. It’s for my atheist friends, skeptical acquaintances, and undecided agnostics.

This blog post is my story of why I left atheism and started to believe in God. You can skip the reading and go straight to watching my video testimony by scrolling down. Then please share this blog post on Facebook and Twitter because it may bring unbelievers to Christ.

Ever wonder how people in the modern world can still believe in God despite the enormous amount of scientific evidence that points against one existing?

I mean, you would think that with all the scientific research out there and the progress we’ve made in academia, that religion would be near annihilated by now. Right?

But it’s not. Religion is alive and not well.

I’m Peter, and I can relate to you in a few ways:

But I no longer believe those things. You see, I’ve become a Christian.

Why I Left Atheism

I have dozens of atheist friends and acquaintances.

From my conversations with them, I found that atheists generally fall into two groups:

I recently recorded on video my story of leaving atheism and embracing God.

When I first told my story on camera, it was 45 minutes long. But the video had to be condensed from 45 minutes to just 4 minutes.

After watching it, you’ll find that there are missing gaps that will leave you wondering how I could go from being an atheist to being a Christian.

That’s why after you watch the video, I’ll give you a link to my full written story to read if you like.

But first, here’s the video.

As promised, here is a link to my full story. It will open in a new tab so you can read it later after you’re done with this article.

How Certain Are You That God Doesn’t Exist?

I ask atheists and agnostics to share with me a numerical statistic of how sure they are that God doesn’t exist.

Their answers vary from being as high as 99% percent positive that God doesn’t exist, to as low as 10%. 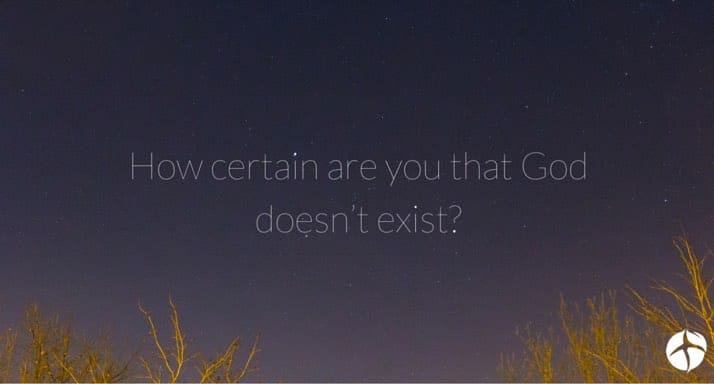 Some people estimate that the average human has about 1% percent knowledge of all the knowledge that there is in the world.

So how can someone who has 1% of all knowledge in the world say that they are 100% sure that they’re right about there being no God?

The number should be lowered to something less than 100%.

For the rest of this post, I’m going to assume that you’re 99% sure that God doesn’t exist, and that you’re just 1% certain that He does exist.

If your numbers are different, just stick with me for a little bit.

If You Don’t Eliminate Your 1% Doubt as an Atheist, Then You’re in Danger

You see, I used to be 99% sure that God didn’t exist, and I was willing to admit that there was a 1% chance that I was wrong.

That 1% bothered me sometimes. I would ask myself sometimes:

After all, I’ve lied, I’ve stolen a few things, and I’ve hurt a few people along the way even though it was mostly unintentional.

If you’re honest with yourself, then you too have had your moments of doubt about your position about God’s existence.

Whatever the number is of how certain you are that there is no God, if you don’t eliminate your doubt, then you’re going to suffer these problems:

Imagine Your World When You’ve Eliminated Your 1% Doubt

What would your world look like if you put to rest the issue of God’s existence, and you became 100% sure of your position?

You would finally be able to get rid of your lingering doubt so you can have peace of mind.

You would feel comfortable in your shoes, like walking in flip-flops along a sandy beach. 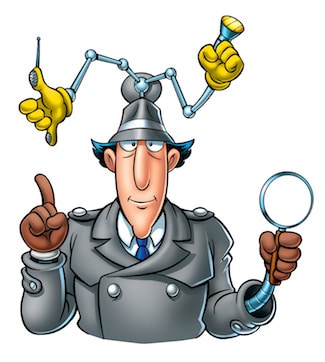 Inspector Gadget is a funny cartoon character who investigates strange cases and always solves the problem. You’re being challenged to investigate God’s existence deeper than before.

That’s why I’m making you a special offer.

I’m offering for you to get rid of your 1% doubt (or greater) by reading things you’ve never read before.

For the rest of this article, I’m going to give you three areas of investigation.

I want to challenge you to become like Inspector Gadget, without the weird hat.

I want you to read the opposition’s materials.

It’ll be a spoon full of sugar that will make the medicine go down, spin around, and fall to the ground (That’s just me being silly because I felt like rhyming).

This Exercise is Only For an Elite Group of Atheists

Let’s face it. Reading the opposition’s point of view sometimes gets us angry, upset, or outraged.

But only atheists that can set their emotions aside will be able to carry out the task at hand.

It’s something that’s hard to do, but it is possible.

I’ve done it when I was an atheist.

I’ve also done it now that I’m a Christian because I read all kinds of material by non-Christians about spirituality.

If doing a deep investigation into the opposition’s point of view is not your cup of tea, then stop reading this article, and go drink a cup of orange juice.

But if it is, then keep reading.

You Might Be Thinking, “But I’ve Already Read About This Stuff Before.”

I hear you loud and clear captain. But I’m pretty darn sure you haven’t read the material that I’m about to give you.

Plus, I’m not asking you just to read the sources listed below.

I want you to understand enough about each of the topics mentioned either until you eliminate your 1% doubt, or until you change your mind about God’s existence.

So here are the areas that I think are most compelling for you to investigate.

As you’re looking at the reading material, consider the source.

Ask yourself these questions to identify if the source is a good one:

1. Evidence #1 – Evidence For the Resurrection of Jesus

Was Jesus a real person who existed? Did He die on a cross? How did Christianity spread?

There are all sorts of theories and information out there about Jesus. 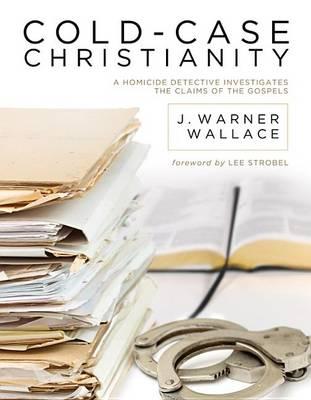 This book is unique because it’s written by a former atheist who was a homicide detective.

One of the best books I’ve read on this subject is by a brilliant detective by the name of James Warner Wallace.

The best part is that Wallace was an atheist too, so he knows exactly the way you think, your skepticism, and he can relate to where you’re coming from.

For a small investment, you can read how a homicide detective approaches the investigation of Jesus and His resurrection.

I guarantee you that this book is unique, and Wallace’s methodologies of investigation have not been applied before to the subjects of Jesus and Christianity.

Is there a God? Does God exist? Discover these eye-opening resources to find out once and for all. Click To Tweet

This is the evidence that the late atheist Christopher Hitchens said was the most compelling argument for God’s existence.

Here, watch this video to see what I mean.

I highly recommend that you make the fine tuning of the universe an area of investigation.

But what it does say is that because the universe has the appearance of  being designed, then the probability of there being an Intelligent Designer is the most likely choice.

3. Evidence #3 – Evidence For a Created Universe in Physics

If you’re fascinated by physics, then I recommend starting with reading this article.

Then I recommend doing an investigation of the problems with Dr. Lawrence Krauss’s theory on a universe from nothing.

Google “Lawrence Krauss a universe from nothing problems,” or a similar search term.

Also, Stephen Hawking has a theory about how the universe could come from nothing.

But his theory has some fatal flaws that are pointed out by Sir John Lennox, a mathematician from Oxford.

John’s book is another eye-opening read that is highly recommended. Click here to check it out.

You Can Be Either Like Sam Harris or Antony Flew

Sam Harris is considered by many to be the champion for atheists.

He’s regularly seen debating people from different religions. Sam’s arguments are seen by some as being best-of-class.

I’m sure you’ll agree that Sam spends a lot of his time reading material from “the other side.”

You can be like Sam too by reading these resources.

Either it’ll cause you to continue to be an atheist.

Or it will cause you to switch sides like former atheist, Antony Flew.

Antony was one of the most famous atheists of his generation.

He was well-known for teaching that all people should assume atheism, until evidence for a God surfaces.

Antony wrote books, made speeches, and did many things to be a staunch advocate for atheism.

But all of his efforts were reversed in 2004 when he made the shocking announcement that he believed in God.

I Care About What Happens to You After You Die

So why am I doing all of this?

It’s because I care about you, and about what happens to your soul after you die.

I’m so convinced that my position about God is true, that I’m willing to put up with the hateful comments, snarky social media comments, and even false accusations by some people.

You see, I believe that you and I are sinners and we do a lot of things that are wrong.

1. How many lies have you told in your life?

If you’re anything like me, then you’ve told a ton of lies throughout your life.

That makes us both liars.

2. Have you ever stolen something, even if it was something small?

When I was a kid, I stole a toy from a grocery store near my home.

My mom found out about it, and made me return it.

I was a thief. If you’ve stolen something big or small, then you’re one too.

I’ve also stolen a bunch of pens and paperclips from companies that I’ve worked for in the past.

That counts as well.

3. Have you ever lusted (had a strong sexual desire) for someone, or slept with someone who you’re not married to?

God sees both of these acts as being sinful.

You and I are going to be found guilty of doing all sorts of bad things unless there is a way out.

God made a way for you and me to ditch our punishment for the wrong things we’ve done by turning away from our sin (repenting), and putting our trust in Jesus.

You and I committed crimes against a Holy God, and we stand before Him waiting for our sentence to receive our punishment.

But then in comes Jesus who tells the judge:

Judge, take the sentence that you’re about to give my friend and give it to Me instead. Let them go and put Me in jail.

If you repent (forsake your sins) and put your trust in Jesus, then you can avoid getting the punishment you deserve (hell), and go to heaven instead.

I Know it Sounds Crazy But That’s What I Believe

There was a time in my life when if I read the preceding paragraphs then I would have dismissed them as the rantings of a fool.

But now I am a fool for Christ and it’s a privilege for me to be that way.

If I can answer any questions, or help you in any way on your spiritual journey, please leave a comment or contact me using this contact form.