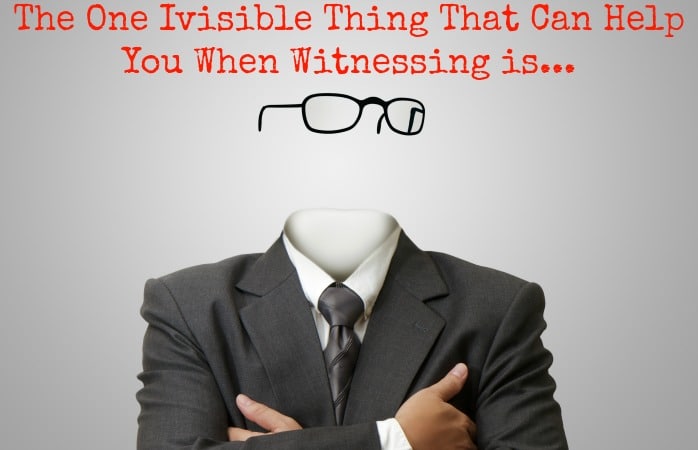 (Note: there’s a video at the end of this blog post)

You might not realize that every time that you go out evangelizing, you have something that’s invisible that can help you get your point across to the other person.

This thing I’m referring to is often ignored not only because it’s something that you can’t see, touch, or smell, but also because it’s often overlooked when we read the scriptures.

This is How Powerful This Thing Is

One day, I was witnessing in the streets of Carson, CA near where I work. I was in an open shopping center where there was an Albertson’s grocery store along with a few other shops.

As I was passing by one of the small stores, there was a man who was petting a dog. He was smoking a cigarette and he looked like he was either in his late teens or early twenties. So I struck up a conversation with him about his dog.

He didn’t really seem like he wanted to talk much so I left him and went to pass out gospel tracts. As I was walking back to my car, I ran into this young man a second time. He was sitting down on the pavement in front of Dunkin’ Donuts so I gave him a gospel tract in the shape of a million dollar bill.

“Hey dawg, that’s fake money! I need some real money man.” The young man said, as he puffed away on his cigarette.

I gave him what the Lord put on my heart and I sat down next to him and I started a conversation.

“Now that I helped you out,” I said, “I was wondering if you can help me out.”

“I’m working on a project in which I’m asking people what they think happens after we die. May I please ask you what you think will happen to you after you die?”

So the young man began to explain that he had no idea what happens after we pass away. As he was talking, I noticed something strange.

He didn’t make much sense and he was kind of rambling on. That’s when it dawned on me that this guy was high!

So I tried to cut to the chase. “Do you think that heaven exists?” I asked.

“Are you going to make it there?”

“Of course, many times,” He answered.

“What do you call someone who tells lies?”

“That’s right, a liar. Me too, I’ve told many lies in my life. How about this, have you ever stolen anything?”

“What do you call someone who steals?”

“There you go, that’s right. Have you ever taken God’s name in vain? That means that you used God’s name as a cuss word to express disgust?”

“No, I’ve never done that!” The young man defended himself.

So I said, “That’s called blasphemy and God says He will not hold him guiltless whoever takes His name in vain.” (Pause) “How about this…Jesus said that if you look upon a woman to lust after her, then you have committed adultery with her in your heart. Have you ever looked with lust?”

“Yes I have,” the young man admitted with a shameful face.

“So by your own words,” I said, “You admit that you are a liar, a thief, a blasphemer, and an adulterer. I used to be guilty of these things too. Now, if God were going to judge you on judgement day, would you be found innocent or guilty?”

“Would you go to heaven or hell?”

I looked at him with one brow up and asked, “How do you figure that?”

So I told him, “Imagine that you are in court in front of a judge for a crime that you’ve committed…let’s say…drug dealing. Can you tell the judge, ‘Judge, I think you should let me go because it’s been a long time since I last dealt drugs?’”

As I began to explain how we are under the Law before we come to Christ and how Jesus died for our sins so that we can be under grace, this man kept on rambling about different scenarios of committing crimes and what punishment he thought he deserved.

I tried to snap him out of it but I couldn’t. Nevertheless, I realized that this man was awakened from his drug instated stupor for a few minutes to realize that he was a sinner.

Wow, what a powerful invisible partner I had to help me during this witnessing conversation!

The One Invisible Thing 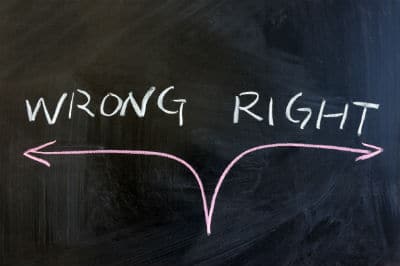 It was the use of the Law working on his conscience.

The conscience is so powerful, that it was able to sober up this drug-induced man for a few minutes.

According to Dictionary.com, the conscience is, “The inner sense of what is right or wrong in one’s conduct or motives, impelling one toward right action.”

God gave us a conscience in which He has written His law on our hearts.  Romans 2:14-15 says:

…for when Gentiles, who do not have the law, by nature do the things in the law, these, although not having the law, are a law to themselves, who show the work of the Law written in their hearts, their conscience also bearing witness, and between themselves their thoughts accusing or else excusing them.

For the wrath of God is revealed from heaven against all ungodliness and unrighteousness of men, who suppress the truth in unrighteousness, because what may be known of God is manifest in them, for God has shown it to them.

So how to do we appeal to the conscience?  By taking someone through the 10 commandments because the Law is made for sinners.

…The law is not made for a righteous person, but for the lawless and insubordinate, for the ungodly and for sinners – 1 Tim. 1:9

I learned this by going through the Way of the Master series by Ray Comfort and Kirk Cameron.  Want to see the teaching in action? Watch Kirk Cameron witness to gang members at the Santa Monica Pier.

If you don’t want to miss out on how to use the Law when witnessing to others, then enter your email address in the box below to get notified of the weekly blog post.